All library books. All mysteries.  All from series I've been enjoying already.

Other things from July:

Being the fireworks aunt when my nephews were in town for VBS.  (My dad is the tractor driver and my mom is the 'snacks and random firestarter' person, so we're all really cool now.)

I feel like I've eaten out a lot and I don't feel bad about it (I normally worry about the cost and nutritional value, or lack thereof).  It's mostly been chicken strips.  It's been convenient and fun.

I don't know that my yarn stash is very manageable, but it's fairly organized and I have plans for at least half of it.  Which is good, because I bought some more today.  It was thrilling.

I am mostly caught up on laundry. We are mostly ready for the new school year.  "Mostly" is perfectly good enough for me.

I love life, but my face still looked like it did when I was harried.  So I changed moisturizers and I feel like that helped.

I may or may not be successfully raising succulents.  It's so hard to know with them.  But so far, my nondead ones look okay.

Morning glories are still my favorite thing to wake up to. 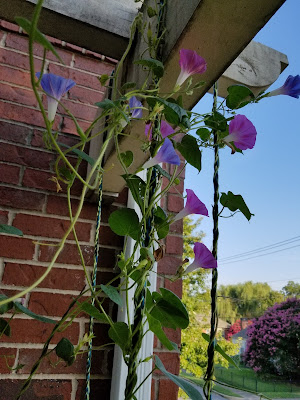 I think Evelyn and I have done maybe half the things we wanted to do this summer.  That's fairly great, but I'd like to do more and I'd like to do everything more often.

But I'm off work all this week so today we walked part of a trail at Toltec Mounds, ate not-BBQ things at a BBQ place in Scott, checked out a produce stand and bought another succulent in a fun planter (along with some okra to surprise Cody with!), played at a park where we were the only people at the playground, hit up a yarn store, and had ice cream after we picked up Cody from work.


I'm realizing 1) that should have been a bullet-point list and 2) I left out the part where I bought Evelyn a grab bag at the Toltec Mounds State Park gift shop and she got a geode that she broke herself AND a flute that she is doing her darnedest to learn to play. 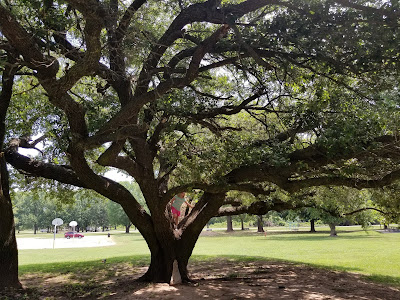 Today I climbed a tree with Evelyn at the park.  Cody can't get over this picture of me from today because it's been so long since he's seen me up a tree.  I felt right at home.