We went into the year exhausted and I didn't realize how long life had been so hectic until the PTO president emailed me and asked me to send her a copy of the minutes and I realized I had not done so.....for the entire fall semester.  Being in the PTO was stressful and there were a lot tense situations at Evelyn's school that didn't make sense until later.  My work was the busiest it had ever been and I worked a lot of weekends and stayed a lot of late nights.  It was hard for us to make plans.  I missed a nephew's birthday party.

I struggled with trying to keep us in clean clothes, sending in the right amount of money at the right time for school activities, never being able to volunteer, and managing Evelyn's expectations for her birthday because she wanted a big blowout but was born over spring break.  One little girl was able to come.  I struggled with feeling like I couldn't make anything happen for my girl.  It didn't help that she had taken to pointing out how different her life would be if So and So's mom were her mom--like I wasn't already thinking of it every time I saw this person (who is totally nice!  And not my enemy and I like her a lot!).  The child knows my buttons and just held them down for weeks on end.  I almost wrote a birthday post for her at the time and realized I couldn't remember whole months from when she was 7.

I think we went out for dinner on Cody's birthday, but I couldn't tell you where or if I remembered to buy him a gift.

A nicer thing about that part of the year that I can remember is that Evelyn went on her first sleepover!  She stayed up until 11!  The little girl who invited her over then came to Evelyn's first sleepover/birthday party at our apartment!  Both experiences were Peak Eight-Year-Old, and Cody and I (along with BFF's parents) were tickled with the whole thing.

Also, at some point there was a weekend when I roamed through the woods with Evelyn twice and Dallas once.  I took his senior pictures just like I did with my other siblings.

I thought I would try something other than my steady diet of mysteries and didn't care for it.  I went part-time in April.  I tried to catch up on so many things, but it never gave me back the time I'd already lost.  It took me a long time to figure that out.  I did love picking up Evelyn from school at the pick-up line on Mondays and Tuesdays.  I would frantically spend my day doing errands and taking care of long-neglected chores, and then sit outside her school at 2:30.  We would leave the parking lot with the windows rolled down and Nickelback playing at full volume.  She felt very cool.

I knitted Cody a sweater.  My love obviously knows no bounds, and he knows it. 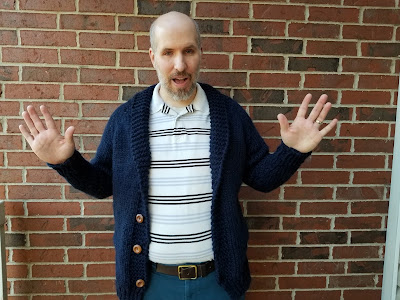 We went to Mississippi for Easter.  There were 2 puppies!  4 kids!  I think we hid eggs 5 times!  The kids had matching outfits and the adults had a lot of food.  No one had any doubt about the rankings, but I'll go ahead and say it: Sara is still the cool aunt.

On one of my days off, I went to the library by myself and browsed for a solid hour.  It was amazing.  We found out Evelyn's school was closing and I was a wild woman trying to find another one that I could feel good about when I didn't feel good about much at all.  I loved her teachers and the parents at her school and I miss it still.  The evening we found out, I was out to dinner for co-workers.  I wanted to stay home but it was to celebrate someone's January birthday, so I felt obligated to go while Cody texted me updates about how she was taking the news.  I found out she needed glasses and felt like the world's most negligent mother.  She was excited to receive compliments on her bright pink frames. I painted some mineral tubs to brighten up the balcony and planted zinnias and morning glories.  The less said about the zinnias the better, but the morning glories did pretty well. 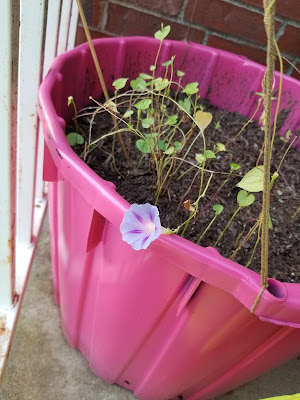 June
Death of a Nag. M.C. BeatonN is for Noose. Sue Grafton

Flood, flood, and flood.  Evelyn and I were summery girls.  She took swimming lessons!

It was so hot I wanted to throw up every time I went outside.  But we did try to spend time outside--state parks, the river front, my parents' house, and Dallas's pool were all thoroughly enjoyed.  My favorite summer memory was probably when Evelyn and I floated in a pool in some inner tubes that looked like donuts.  We held hands and drifted around.  I was lightheaded from happiness and from blowing up the inner tubes.  She made me watch her jump off the diving board over and over.  I waited with the inner tube, ready to catch her.

Evelyn started her new school.  She might have settled into things better than I did.  A knitting friend shared some yarn with the rest of our group and I came home with a Rubbermaid tote's worth.  Whoops.  I knit a bunch of hats.

Cody and I celebrated out 13th wedding anniversary.  The weather was a little more manageable, so we had some weekend adventures.  We got a better idea of what our evening routine should be, with homework on some nights because that's a thing now.  Evelyn started doing gymnastics one night a week and has done okay with the delayed bedtime.  If you had told me back in 2015 how much she loves early bedtimes and how promptly she gets herself ready most nights, I would have fainted.  I knitted a bunch more hats.  I volunteered one afternoon a week with the school's running club. It was super fun to yell encouraging things at kids while they ran their laps and watch them brighten up and go a little faster.

I went back to work full-time in the middle of October.  I spent the last of my free days scouring shops for supplies for Evelyn's costume.  It was another exercise in trying to manage her expectations and feeling like an ill-tempered failure at all things craft- and parenting-related, but I'm glad I had the time for it.  My very last free day was spent chaperoning at the state fair.  Even with the rain and the cold, it was probably one of the best days of the year.  We went back that weekend with Cody, and I ate a Frito chili pie. There were so many fancy chickens, I almost couldn't handle it.

After almost completely abandoning Evelyn's input and spending a few late nights covering the living room with pieces of fabric, I finished her Unbeatable Squirrel Girl costume the day before her first Halloween event.  There were a lot of Halloween events.  She loved wearing her costume and telling people who she was.  I was grateful that my sloppy sewing of fake fur onto her jacket held up. 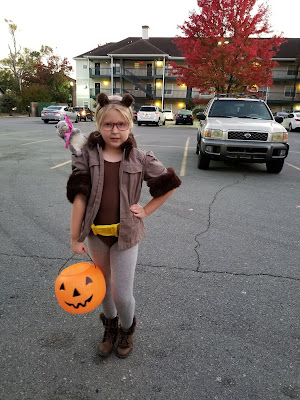 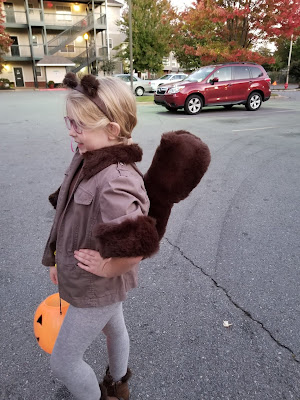 I donated 18 hats and a bunch of yarn to a group that knits hats for the homeless at our library.  It felt fantastic.

I don't enjoy any of the Lisbeth Salander novels, but I am apparently going to read all of them.  I started a lot of books in November, but I guess I didn't finish many.  I took off the week of Thanksgiving because Evelyn was out of school.  I had a cold or two.  Evelyn probably got an ear infection.  I took a trip to the National Quilt Museum with my mom and sisters.  We saw a lot of quilts!  I was in no way inspired to sew more, but I definitely want to go back to Paducah some time when it's warmer and we can explore more.  The windchill was, like, 2!  We got matching sweatshirts. 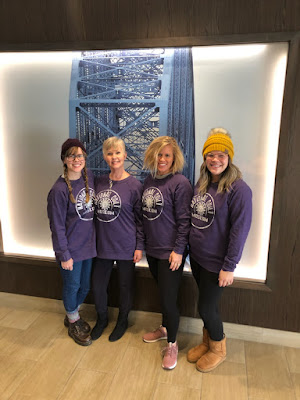 There were so many holiday things!  I spent the first part of the month shopping and trying to stay on schedule and manage things and mostly succeeded.  I turned 37, which felt nice.  I took the day off to finish some Christmas errands and have lunch with Evelyn at school.  We were basically famous, AND it was pajama day, so she felt like it was the best day ever.  I have to agree! I've gotten to see my family a lot this month, and I'm very grateful.  Our Christmasses weren't quite what we'd planned, but Evelyn had a good time.  We wrapped up the year (and this decade, holy smokes) with friends at a wedding for some loved ones, which seems like a good way to end a year and begin the next one.

(Note: I didn't bother marking library books with an asterisk this time because every single book in this post was a library book. !!!)
Posted by Jen at 1:44 PM