Pagan Spring was fine, I guess.  P is for Peril was pretty great.  I can't believe I stayed up past midnight on a weeknight to finish Demon Summer because the last few chapters were kind of dumb (I am still working my way through the series, though).  The graphic novel of Beowulf was pretty much what you'd think it would be, which is fine.

Cody and I celebrated our 13th wedding anniversary.  It was pretty understated, but we were happy.


It was so stinking hot, but Cody and Evelyn went bike riding at least once.

We went to some libraries and museums.

Evelyn and I have been braiding each other's hair.


We're starting to do a few more activities with Evelyn's school.  Cody went to a PTO meeting, we're both signing up for volunteer activities, and Evelyn is in the Little Rockers running club.  She disliked her first run last week, but I think she'll like it if she sticks with it.  So I'm bribing her with rewards for every 5 miles.  2 miles down, just a few more to go!

This past Saturday we got out of town for a quick trip to Blanchard Springs Caverns.  We made a few stops at the Natural Bridge and a nice little bakery/cafe in a town called Leslie.  I was overjoyed to see big rocks and small towns with odd names.  Evelyn got a little tired and cranky by the end, but took a nap on the way home.  Cody said his favorite part was the 10 hot and grouchy minutes we spent at the actual springs, go figure.


That's it!  Evelyn has big spooky plans for October, and I'm just going to try to keep up.  I go back to work full time at the end of the month, and we're going to try to go camping and spend more time outdoors in the (please Lord) cooler weather.  It looks like it's going to be full and wonderful time.
Posted by Jen at 7:08 PM No comments:

My favorite was probably the animal facts books because it had charming pictures. The mysteries were par for the course and the knitting book was not for me. 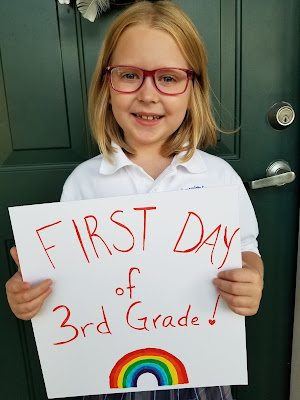 Evelyn started a new school year at a new school.  Every single day was blazing hot.  I knitted a bunch of hats.
Posted by Jen at 9:38 AM No comments: