November's book list is a bit different.  I didn't finish any books this month, and I don't think I will in December either.  But my gradual purge is still going on and I'm re-examining what I have and why I have it.  The process is exhausting and so am I right now.  But I think I'm going to feel better when I'm done and I hope our home is a little happier and I'm more mindful about book purchases in the future.  We have libraries, we frequent the daylights out of them, and we're probably not going to get all book crazy again until we own a home.

Books 2-5 of the Song of Fire and Ice series are leaving the fiction shelf.  I want to have more space on there for Evelyn's puzzles and also, really, I hate these books.  I hate George R. R. Martin's writing, I hate the portrayal of women, I hate the clunky dialogue, I hate the nightmares I have for a month or so after I read these books.  I want this clumsy evil out of my house. 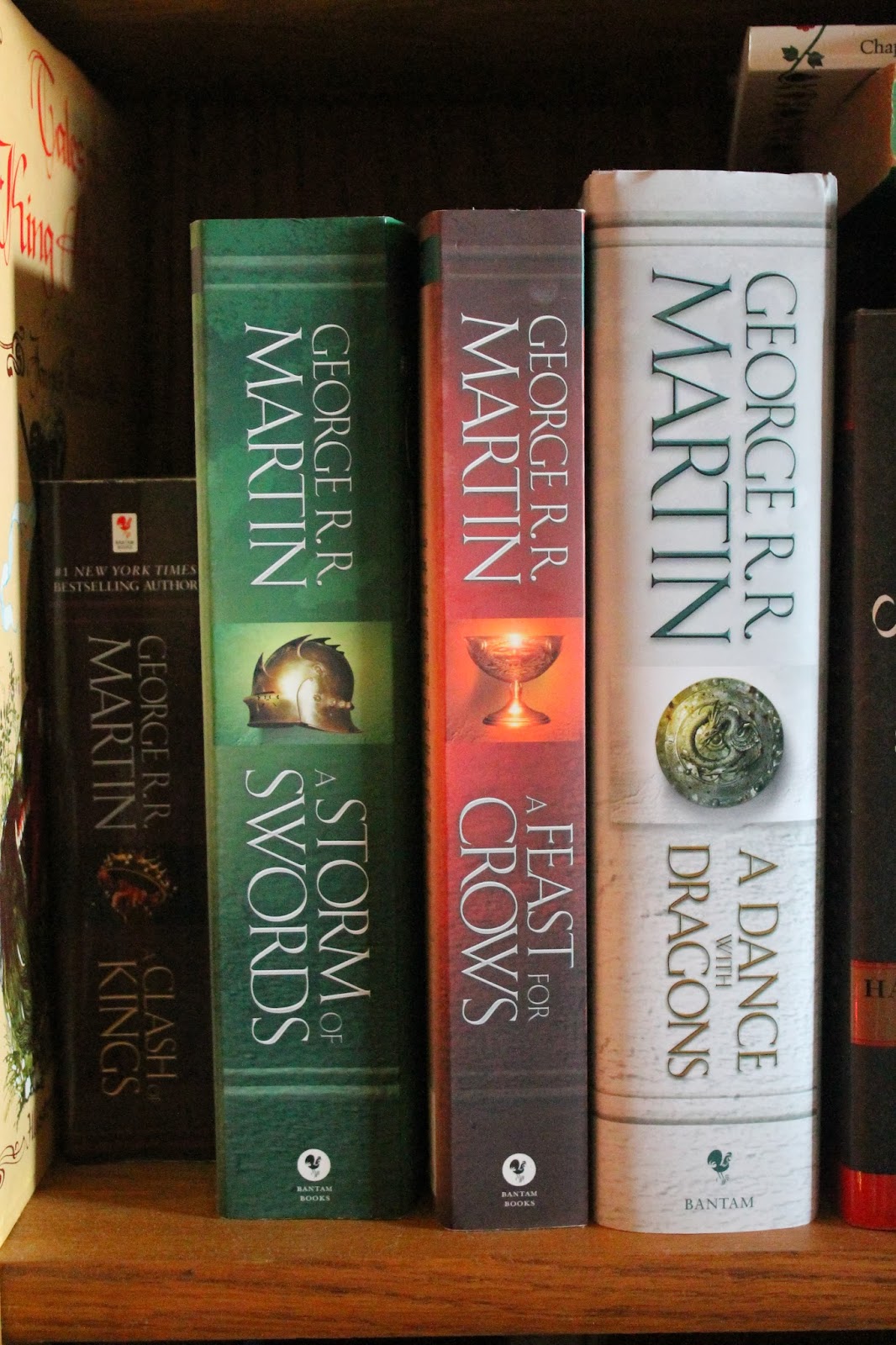 I'm unloading them on a co-worker.  Discussing these books with other fans is super fun, and I'm totally going to read the last two--assuming Martin's health lets him finish them.  But I'll borrow them from someone.  I always intend to reread the series before beginning whatever the newest book is, and I never do.  I finally realized it's because there's no way in the realm beyond the wall that I'm going to force myself through gazillions of pages of this all over again.  Ever.

Next up is A.S. Byatt's The Children's  Hour.  I bought it with Christmas money several Christmases ago and held onto it because I typically LOVE Byatt.  LOVE.  And I bought this with Christmas money and it's only one of two of her books that I own--the other being Possession, duh.  I reread that every couple of years and love it every more each time.  If I can't get through the first 100 pages of this, and really don't want to, then I don't need to have this around.  So out it goes.  I don't even mind. 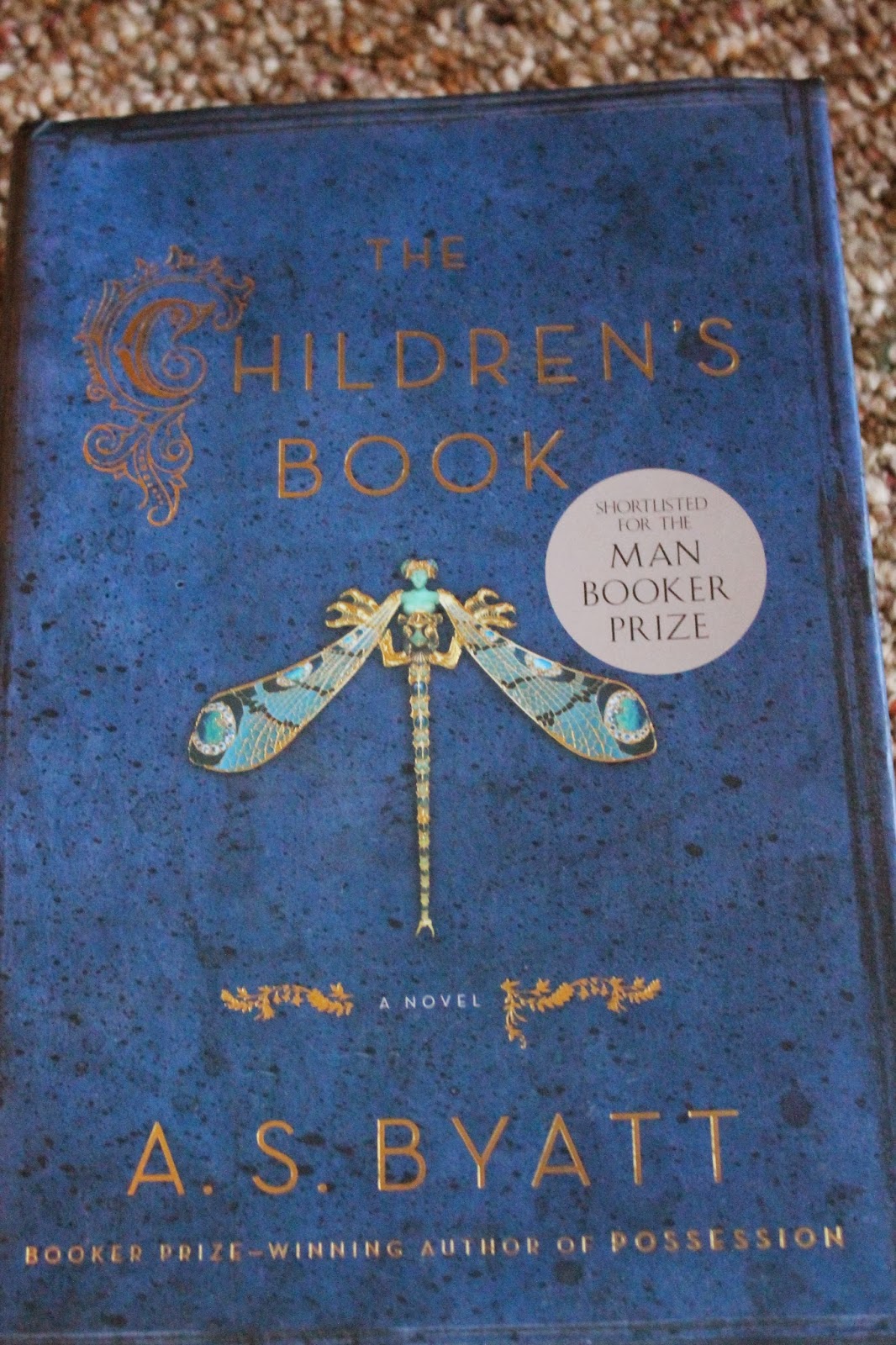 I don't think I'll get rid of books every month I don't finish something, even though that is kind of like this destashing challenge I was in on Ravelry up until last month when I started lagging.  The idea was to dig into your stash and commit something every month to a project.  I've been a little pressed for time and couldn't always use stash for other projects I needed to make.  But there might be time to catch up before the end of the year.

Anyway, the whole point of the challenge to force people to look at their yarn and think about if they really wanted it or not.  If they wanted it, they should use on some awesome project.  If they weren't that committed, then maybe they should get rid of their yarn.  No one's tossing anything in the trash! But some things have been donated to charity shops, classrooms, senior centers, and some stuff is swapped out or given as a gift.  I think it's a good approach to take to our books every now and then.

Anyway, I'm currently reading Beowulf and The Historian again because they're wintry and excellent and engrossing.  Beowulf is a library copy of Seamus Heaney's translation, and The Historian is my slightly battered copy that will move from home to home with me until Evelyn is old enough to steal it.  I'm enjoying myself.  I was reading a book about homesteading because that's my equivalent of escapist fantasy, but I catch myself arguing back with so much of what the author is suggesting (no! I'm not allowed to have a rain barrel on my balcony and it doesn't get full sunlight and composting so close to a dwelling is a terrible, terrible idea! No, YOU'RE full of excuses!) that it wasn't enjoyable anymore.  That's going back to the library soon.  I'm thinking about boxing up those books like that that I already own and storing them away for another season.  It's not like everything must go, but it should feel useful or awesome.  Anything by Seamus Heaney would probably be a great gift, hint hint.

Next on my reading list: Elizabeth Zimmermann's books just because I like her voice, and maybe Possession one more time.  It's been a couple of years, and all that springtime imagery is probably going to feel very relevant by the time I finish it in a few months.
Posted by Jen at 9:23 PM 2 comments:

Our balcony is looking a little rundown. 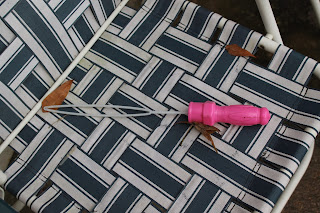 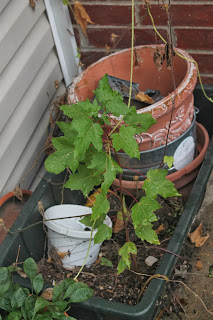 I honestly don't mind.  It may be our last chance to have growing things around for a long time, and sometimes things bloom out here. 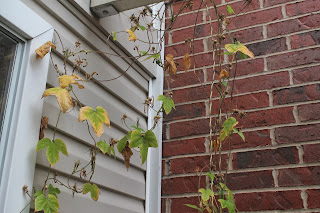 I know we can count on marigolds to outlast even a couple mild frosts, and their oranges and reds match the maple tree near our bedroom window.

Things are a bit of a mess around here.  We're still catching up from a few weekends away from home, and I'm just now getting to some of that switch-around-your-seasonal-clothing stuff.  I'm getting rid of things we don't wear, and trying to find things in Evelyn's closet that are still long enough for her (ha!).  I'm also pulling out maternity clothes, and selling them on eBay.  Not everything, but there are a few shirts I wouldn't be thrilled to see again and they're not helping me any by taking up space in the closet.  Actually, I pulled out one sweater and started wearing it.  It's warm and long, and I like sweaters this year.

I live with a two-year-old.  She has a lot of stuff, and she plays with all of it.  We don't even rotate her toys.  I just bag up things and stash them away, never to be seen again.  She plays with the same things over and over, and we occasionally add new things to the mix.  I'm realizing I'm the same way with books and yarn.  There are certain items, or at last types of items, that I want and use up and enjoy.  And some things sit around and if we're being honest here (and that's what I'm shooting for here these days), I don't want to use them.  So some things must go, so we can make space for what's here and what's to come.

The balcony can enjoy its elegant November decay a bit longer, though. 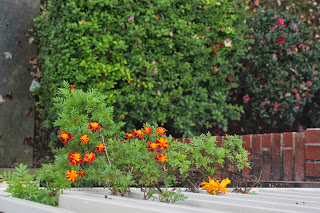 Fforde, Jasper. The Woman Who Died a Lot.*

I'm currently rereading The World Without Us and The Historian.
Posted by Jen at 9:05 PM No comments: 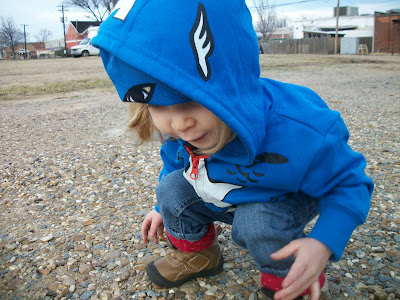 I love when people ask me about Evelyn.  I'm just a really proud mom.  Even when she's hitting the not-so-pleasant milestones like saying 'no' to everything, or getting defiant about boundaries, or wanting to watch the same cartoon DVD 4 times in a row, I can feel confident that she's doing it on time.  But mostly I just tell people, "She's so big!"

I think she's a big girl.  She used to be tiny enough to sleep in my lap and curl around my belly.  Now she sits in my lap and her head blocks my view.

People laugh at me a little.  Some of them even look a little concerned about my delusions.  "That's not big," they say sadly. 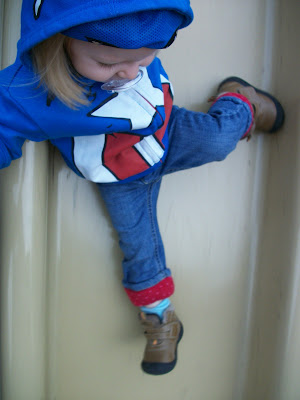 She lifts things.  She wants to move furniture.  She carries heavy books and toys that are supposed to stay on the floor.  She climbs and runs and spins.  You'd think the shine would wear off at some point, but I'm completely blown away at her amazing health and strong little body.  It's so fantastic and strong and whole.  I didn't know a small person could do so much.  I didn't know a small person would want to try to literally climb walls or chase animals for long distances. 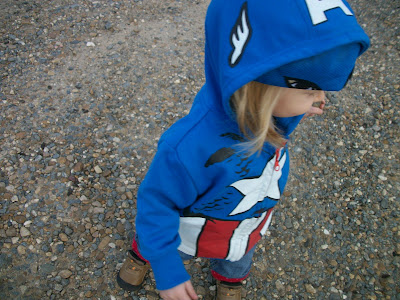 Someday, we might have to let Evelyn know that she's not really flying when we swing her through the air. Someday we may even have to break it to her that she probably can't be a superhero because we're not cut out to be the parents of a crime fighter.

I never want to stop telling her that she's big and strong.  I pray (with a tone of defeat already in my voice) that she'll never ask me to stop saying that, or that she won't want to be 'big' because that's not what women want.  I don't want her to ever feel like she should downplay her strength.  I want her to love her body for being exactly what it is--a miraculous creation that grew and grew and changed and adapted and helped her do all the things she wanted to do.   It's beautiful.  She's beautiful.  She's mighty. 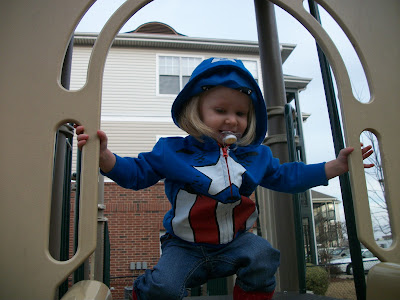 Here it is!  I love my book lists.  Even if this past year wasn't very impressive in terms of reading, it was enjoyable.  I read through the entire Wallander series with the exception of one collection of stories, but that's because they haven't been translated to English.  I read The Hunger Games trilogy, and all but one of the Game of Thrones books.

I'm not sure if I'll go through the Lemony Snicket series, but maybe I will.

I can't believe I only read one volume of Adrienne Rich's poetry this year.  I haven't read through all of her poetry in the library, but I think I'm getting close.  She died this year (I think it was on Cody's birthday), and I re-read Diving Into the Wreck because it's the only collection of hers that I own.  I bought it on sale at Hastings or Books-A-Million when I was 16 or so, and the whole thing was so 1970s Feminist Lesbian Poet Talking About Age and Science and Society.  I loved it.  I'm not the biggest poetry person, but I liked her and I still do.  I thought about writing a post about her, but I didn't know what else to say other than what I just typed there.

Everything else was like junk food for my soul and I stayed up way too late on way too many nights tearing through it.  It was great.


Adams, Douglas. Dirk Gently's Holistic Detective Agency.
--. The Hitchhiker's Guide to the Galaxy.
--. The Restaurant at the End of the Universe.
Collins, Suzanne. Catching Fire.
--. The Hunger Games.
--. Mockingjay.
Fortas, Abe. Concerning Dissent and Civil Disobedience.
Mankell, Henning. Before the Frost.*
--. Dogs of Riga.*
--. Faceless Killers.*
--. The Fifth Woman.*
--. Firewall.*
--. The Man Who Smiled.*
--. The Pyramid: The First Wallander Cases.*
--. Sidetracked.*
--. The Troubled Man.*
--. The White Lioness.
Martin, George R. R. A Clash of Kings.
--. A Feast for Crows.
--. A Game of Thrones.
--. A Storm of Swords.
Rich, Adrienne. Diving into the Wreck: Poems 1971-1972.
Snicket, Lemony. The Reptile Room: A Series of Unfortunate Events Book #2.*
--. A Series of Unfortunate Events: The Bad Beginning.*
Stewart, Trenton Lee. The Mysterious Benedict Society.*
Tapper, Joan and Gale Zucker. Craft Activism: People, Ideas, and Projects from the New Community of Handmade and How You Can Join In.
Voskamp, Anne. One Thousand Gifts.
Woolf, Virginia. Orlando.

Part of me wants to vow to read more 'serious' books.  Books about the subtext and contextual clues about societal ills in our modern adaptations of folklore, or about early childhood brain development.  Maybe something about purposeful living and overly earnest DIY lifehacks.  But there is that fifth Game of Thrones book out, and I had so much fun last year.  I'd like to re-read The Historian by Elizabeth Kostova yet again, and maybe Possession by A.S. Byatt (I think it's the only book of hers I've read that has a happy ending) because I enjoy them so  much.  So I'll try to read a few more books with a focus on learning this year, but overall, I just want to enjoy the reading.