Literary events with Evelyn and Mommy and Kevin Brockmeier

Last night I went to see Kevin Brockmeier give a reading at the Laman Library as part of their Adult Summer Reading Series.

I stinking love Kevin Brockmeier.  And yes, I always use both names when I talk about him.

I have not attended one of his readings since 2009.

I skipped his session at the Arkansas Literary Festival in 2010, because I am an idiot.

Then his session at this year's festival was ticket-only.  I did not know this and did not buy a ticket, and did not really have a chance to buy a ticket because the organizers accidentally sold too many tickets.

So instead I bought stamps for Evelyn's birth announcements at the post office, ate sandwiches with Mom and Dad, and tried not to cry even though postpartum book nerd disappointment can be very, very acute.

Cody and I took Evelyn to the library for the first time ever the very next day so we could attend a Kevin Brockmeier-moderated session for Peter S. Beagle.  It wasn't quite the same, but it was still fun and I hoped we'd have better luck next year.

But then I saw a poster last week for this event and became very excited.  Then very fearful I'd forget.  Then concerned that something would somehow prohibit me from attending.

But nothing bad happened and I went!

And then we listened to Kevin Brockmeier read from his new book and talk with the audience!

Evelyn made it through with a minimum of fussing.  It was around 80° in the room, so she was extra squirmy and unhappy.  Me, too.

She slept a little, but woke up during some applause.

Cody gave me The Illumination for Valentine's Day this year, but I haven't finished it because it's just so sad.  He read one section that I'd already read, then another section I hadn't read, and then he took questions from the audience.

I love when he takes questions from the audience.  He's updated his Top 50 Favorite Books list, and created a Top 50 Favorite Movies list, so when people asked him about that he was all set.  Yes, I took home copies of both.  He told stories of how he accidentally wound up with a literary agent, how he stopped someone from stealing his lunch out of his locker in junior high, and what he does during the day. He even talked about 2 unpublished children's books he has sitting around that need to be published so I can buy them and read them with Evelyn.

I can never think of anything to ask him.  Oh well.

Then it was time for book signing and I was still on the back row, nursing Evelyn without a cover.  I had spent the last part of his talk walking and bouncing her in the back of the lecture room and praying that no one was bothered by her little grunts and squeaks.  Then she really started fussing and I sat down in the nearest chair and fed her.

An old lady came up to me while I was feeding her and I got nervous because I've been told older people hate boobs.  Or something.  But the woman just wanted to let me know that my baby was very "good" (as far as I can tell, when people say this they actually mean "quiet") and very pretty ("the most amazing baby in the world").  I was incredibly relieved, and this was when I remembered none of these people had her 2" away from their ears.  And that the night's demographic was... well, older.  Yay for diminished hearing!  We discretely finished up and joined the line, where people talked to Evelyn and she smiled back at them.  When it was our turn, Kevin Brockmeier remembered me!

He has remembered me since 2007. Awesome. 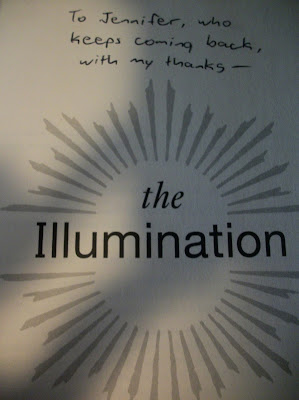 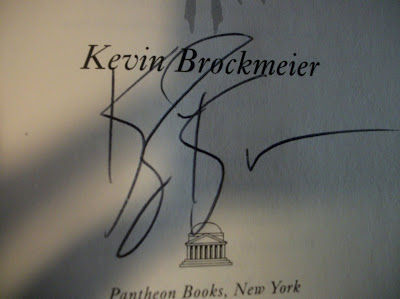 This is not my standard literary-matters post.  This is not my standard adventures-with-Evelyn post.  This is a post about me wanting to do something really, really badly for myself and actually pulling it off and feeling like I rocked it (instead of survived) and being completely excited.  Mom offered to watch Evelyn while I went to the reading, but I wanted to take her with me.  I wanted to hear my favorite author read from his work.  I wanted my daughter to go to this.  I wanted her with me after being away from her all day.  I kind of wanted to make up for her first book signing event being for the Duggars' new paycheck.

I know I won't be able to take Evelyn, or babies that may come after her, to everything.  And I know I won't be able to go out and do everything like I did before having Evelyn.  Things are different now.  I don't read as much.  I don't take as many pictures of things when I'm out and about.  My time for knitting is nearly non-existent (which actually made me want to make the most of my time and start knitting things other than scarves.  And that's cool).  It's the new normal for now and I'm fine with it, except that I really maybe needed to go to the reading last night.  And it went just fine.  It was better than fine.

Evelyn's awake more at night now and more vocal, but she wasn't disruptive.

I made it to the event on time, after work.

I kept a three-month-old occupied and relatively quiet for nearly 2 hours. Someone pin a medal on me!

I nursed without a cover, and even though it doesn't seem like something you should do in a library, no one was outraged or ugly about it.

Even though I don't recognize myself sometimes, Kevin Brockmeier remembered me and signed my book.

You know, for pictures.

See?  Proof that my evening was great.

I like to think Kevin Brockmeier had a good time, too.

A disclaimer: I know how to crochet.  I promise!  But I was taught when I was around 8 or 9.  When you're 8 or 9, your grandmas can just sit you in their laps and say "You do this [shows you] and then you do like this [shows you the next step] and there you are!"  And, indeed, there you are!  You can crochet!  And then you spend the next 20 years not bothering to look up the terms for what you're doing and when you attempt to write a simple post about a simple scarf pattern, you must frantically refer to the page on learning to crochet from the Lion Brand website in order to make sure you're calling the stitches by the correct terms.

A second disclaimer: I am tired and a little distracted, so you may need to should absolutely check out the learning to crochet page in order to make sure that I haven't fed you a whole mess of misinformation.

Without further excuses, here are the instructions to make this scarf: 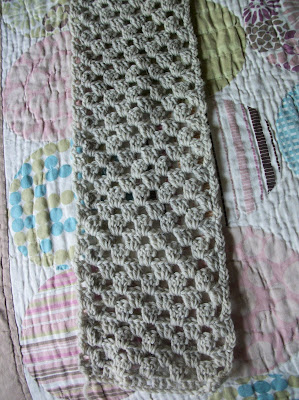 Crochet a chain stitch for 16 stitches.  Hold and crochet 3 more loops (like you would when starting a half-shell in a granny square) and crochet a double stitch in a stitch, and repeat.  Crochet one more double crochet stitch and skip over one stitch.  Crochet double 3 double stitches and repeat until the end of the row.  Then crochet 4 stitches to make a loop, connecting the chain to the end of the row.

Turn your work and make a single stitch along the loop for 3 stitches.

Chain stitch 3 stitches and begin crocheting half-shells to the end of the row.  Do this a million times, or until the scarf is long enough for your tastes.

This is a pattern that measures around 4 inches wide.  I used medium weight yarn and a medium-sized needle--either a size I or J.

I've also used chunky yarn and a fat needle to get a fat and chunky scarf that I've inexplicably never photographed.

I've also used this pattern with sock yarn and a tiny needle (I think it was a C) as well.  You should have to have a longer chain when you start.  I like this scarf because it's lightweight. 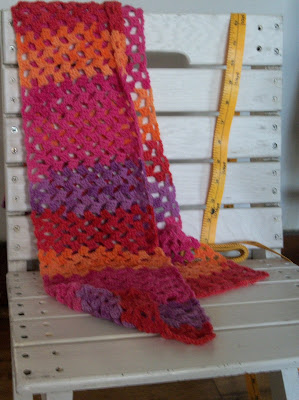